Large Marine Ecosystems (LMEs) are relatively large areas of ocean space of approximately 200,000 km² or greater, adjacent to the continents in coastal waters where primary productivity is generally higher than in open ocean areas

Global map of average primary productivity and the boundaries of the 64 Large Marine Ecosystems (LMEs) of the world, available at www.lme.noaa.gov. The annual productivity estimates are based on Sea WiFS satellite data collected between September 1998 and August 1999, and the model developed by M. Behrenfeld and P.G. Falkowski (Limnol. Oceangr. 42(1): 1997, 1-20). The color-enhanced image provided by Rutgers University depicts a shaded gradient of primary productivity from a high of 450 gCm-2yr-1 to a low of 10gCm-2y-1.

The LMEs produce about 80% of the annual world's marine fisheries catch. Globally they are centers of coastal ocean pollution and nutrient overenrichment, habitat degradation (e.g. sea grasses, corals, mangroves), overfishing, biodiversity loss, and climate change effects. The $12.6 trillion in goods and services contributed annually by LMEs to the world's economy is at risk from unsustainable utilization practices.

There are two important features in the LME approach to the improved management of LME goods and services. First and foremost, the physical extent of the LME and its boundaries are based on four linked ecological, rather than political or economic, criteria. These are: (i) bathymetry, (ii) hydrography, (iii) productivity, and (iv) trophic relationships. Based on the 4 ecological criteria, 64 distinct LMEs have been delineated around the coastal margins of the Atlantic, Pacific and Indian Oceans.

The second important feature of the LME approach is the application of a 5-module strategy for measuring the changing states of LMEs, and for taking remedial actions toward the recovery and sustainability of degraded goods and services. From a management perspective, it is essential to establish a baseline condition against which to measure the success or failure of actions to recover depleted fish stocks, restore degraded habitats, and reduce and control coastal pollution and nutrient overenrichment. The 5 modules are focused on the application of suites of indicators for measuring LME (i) productivity and oceanography, (ii) fish and fisheries, (iii) pollution and ecosystem health, (iv) socioeconomics and (v) governance. 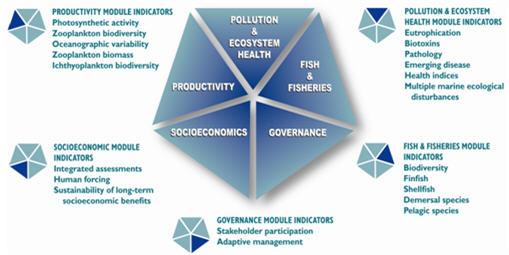 Around the globe there is a growing number of experts in marine science, policy, law, economics and governance focusing on a common strategy for assessing, managing, recovering, and sustaining LME marine resources and environments. 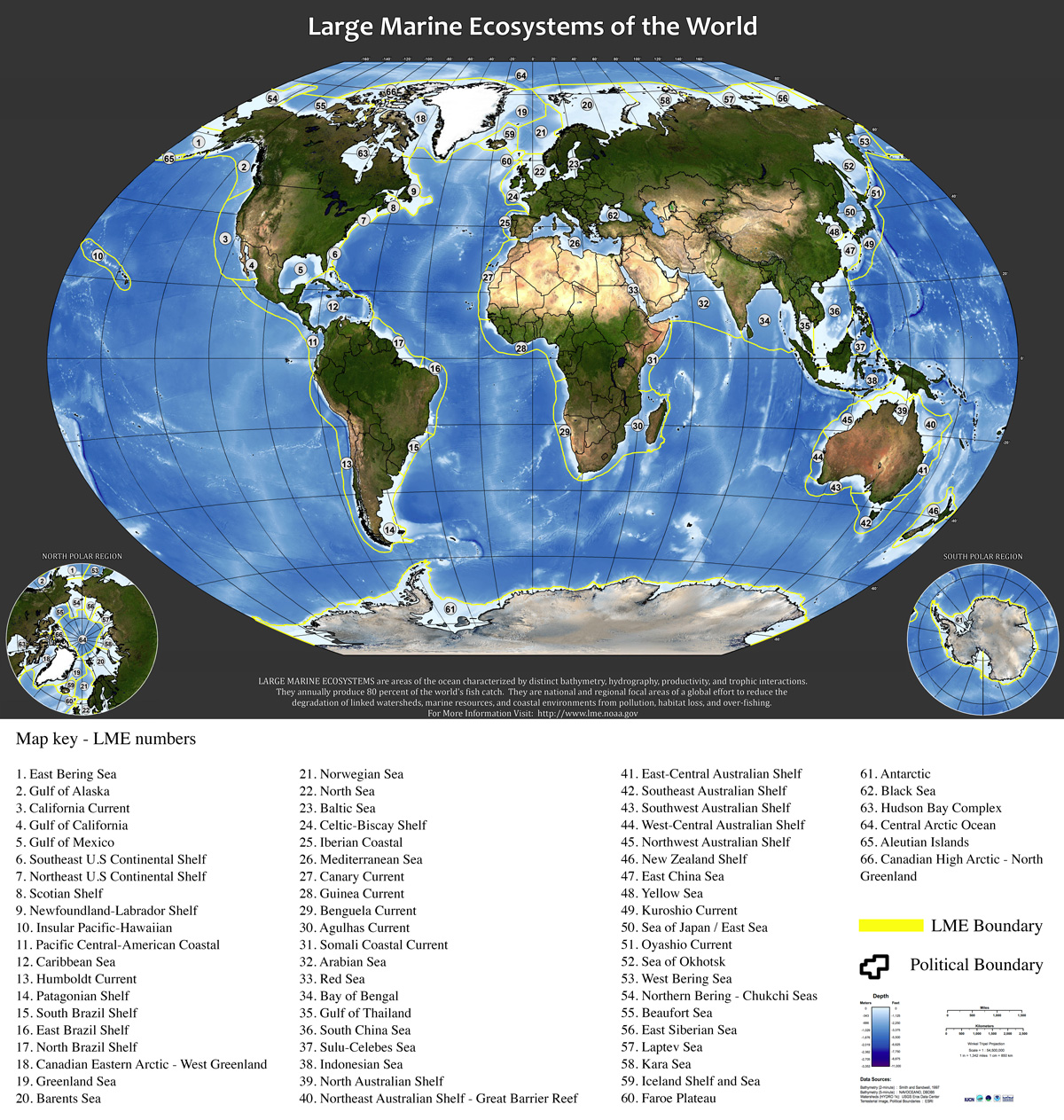