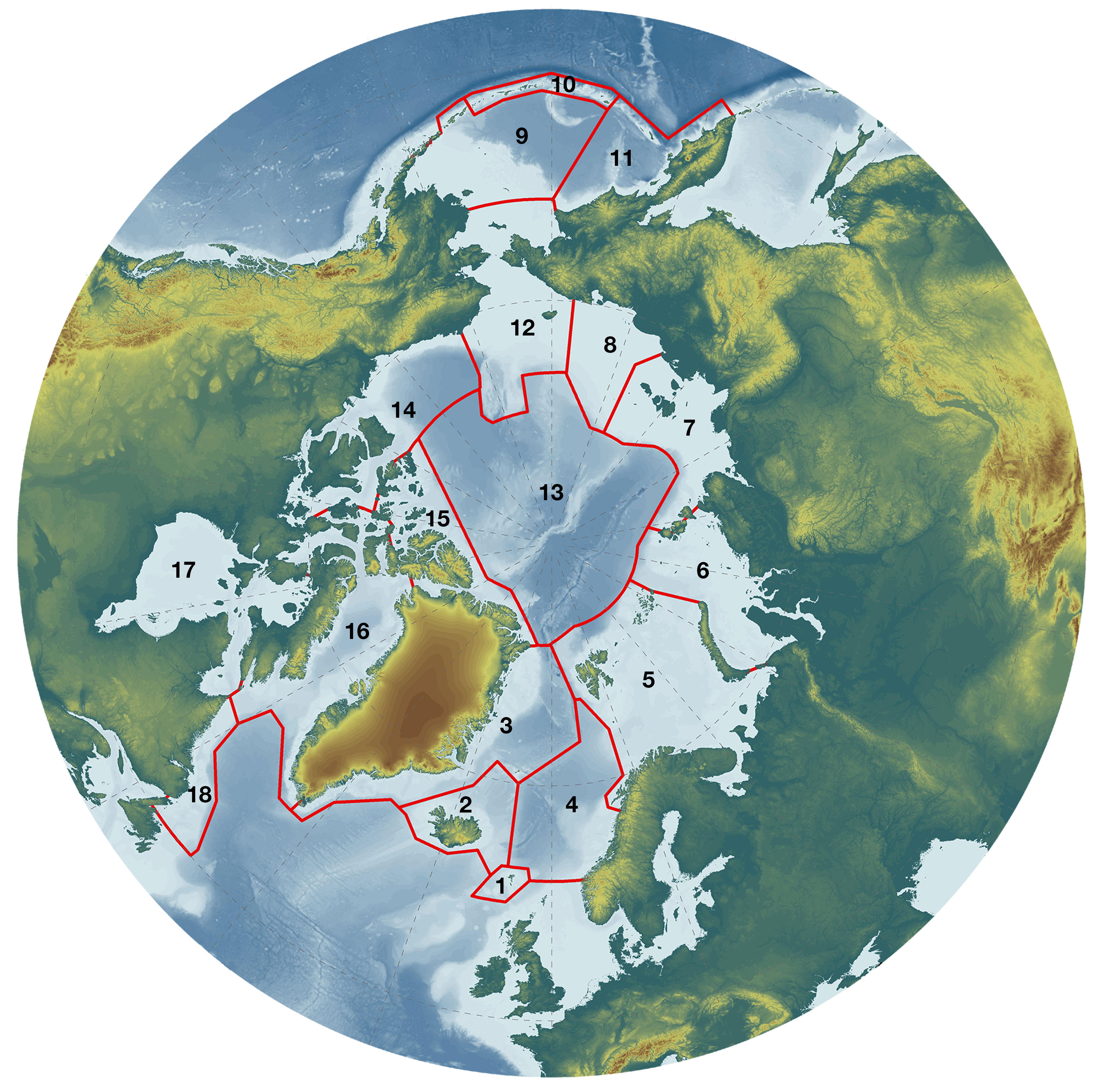 Large Marine Ecosystems (LMEs) are regions of ocean space of 200,000 km² or greater, that encompass coastal areas from river basins and estuaries to the outer margins of a continental shelf or the seaward extent of a predominant coastal current. LMEs are defined by ecological criteria, including bathymetry, hydrography, productivity, and tropically linked populations. The LME concept for ecosystem-based management has 5-module approach focused on productivity, fish and fisheries, pollution and ecosystem health, socioeconomics, and governance.

The EA is embedded in the core of the concept of Large Marine Ecosystems (LMEs) which has been around for about 30 years. The LME process was launched in the early 1980s and has proceeded with a number of symposia and books about the concept, approach, methodological aspects, and conditions in a wide range of LMEs around the globe (Sherman 1994, 2008, Sherman et al. 2004). A number of LME projects have been launched with implementation of the EA to the management of specific LMEs such as the Benguela Current, Yellow Sea, and others (Sherman et al. 2009).

PAME developed a working map delineating 17 Arctic Large Marine Ecosystems (Arctic LME's) in the marine waters of the Arctic and adjacent seas in 2006 The Arctic LMEs were subsequently adopted by Arctic Council. The adoption of the Arctic LMEs acknowledged related work in other forums, in which place-based assessments of the changing states of Arctic LMEs served as the framework for ecosystem-based management practices in the Arctic. The AMAP Oil and Gas Assessment used the 2006 LME map in their work for descriptive purposes to assess impacts of oil and gas activities in the Arctic. Further, the LME concept supports application of the ecosystem approach, EA, to managing human activities that has been promoted within the EU Marine Strategy Framework Directive (MSFD) and OSPAR contexts.

In a consultative process including agencies of Arctic Council member states and other AC work groups, the Arctic LME map was revised during 2012. The revised boundaries of the 18 current LMEs were mapped by the Ecosystem Approach Expert Group (EA-EG) in a report of the consultative process that was subsequently accepted and adopted by the Arctic Council at the ministerial meeting in Kiruna in 2013.

LME Factsheet Series
PAME has started production of Factsheets for each Arctic LME. The Factsheet-series is intended to better communicate the specifics of each LME. Among information are species overview (mammals, fish and birds), in addition to general information on each LME, such as main features and other relevant information. 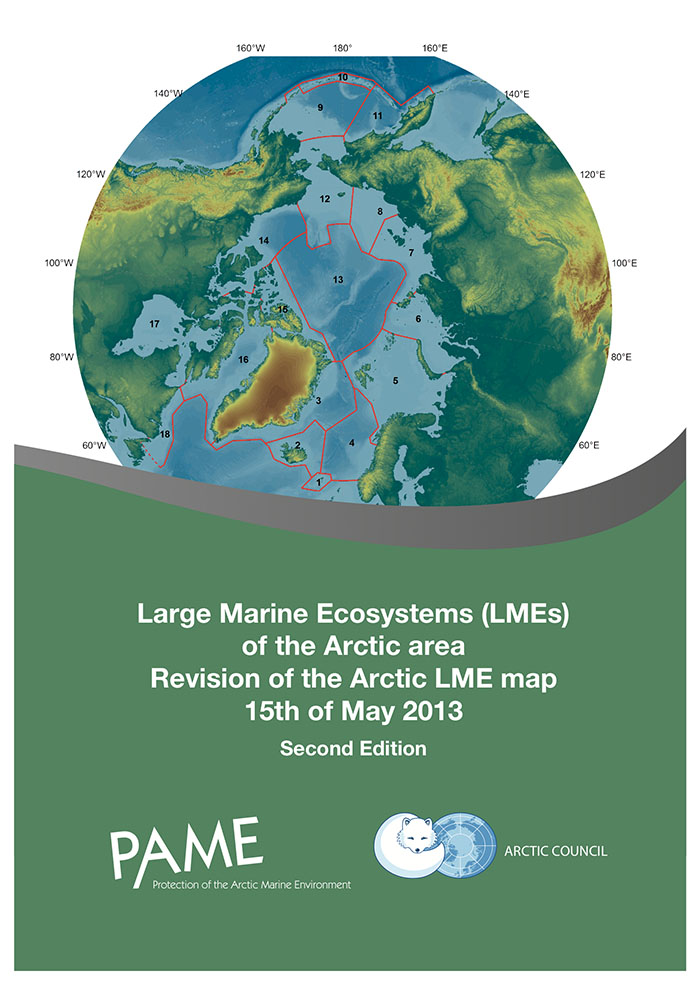 The concept of the Ecosystem Approach to management (EA) has been around for at least 30 years and has been extensively discussed, elaborated and developed. The EA was adopted as an overarching principle and approach by Arctic Council Ministers in 2004 as part of the Arctic Marine Strategic Plan (AMSP) and described in the following manner:

"An integrated ecosystem-based management approach requires that development activities be coordinated in a way that minimizes their impact on the environment and integrates thinking across environmental, socioeconomic, political and sectoral realms. The management of resource activities needs to be focused on realistic, practical steps that are directed toward reducing environmental damage, protecting biodiversity and promoting the health and prosperity of local communities. For such an approach to be successful, the relevant ecosystems need to be better understood, monitored and reported on. Actions must be based on clear objectives and a sound management structure, employing best available knowledge and practices, integrated decision-making and, where appropriate, a coordinated, regional approach." 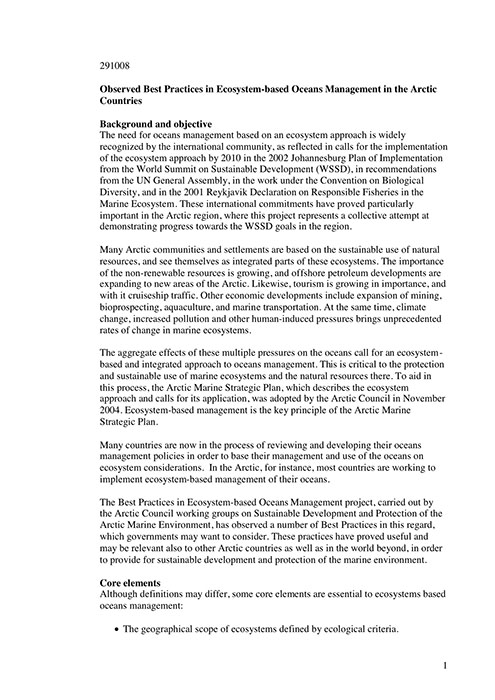 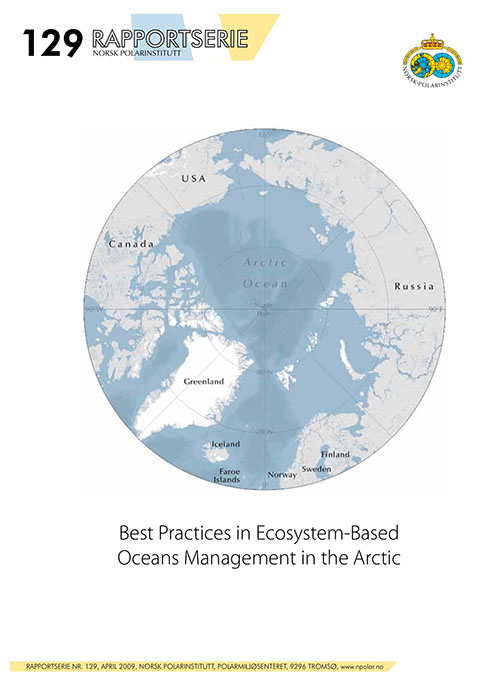 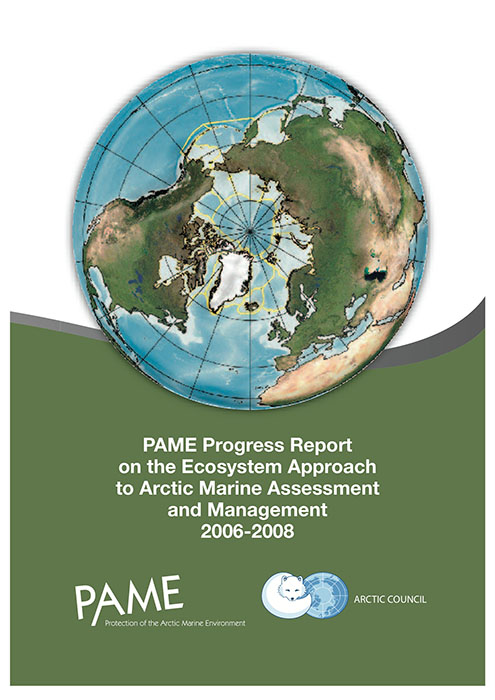 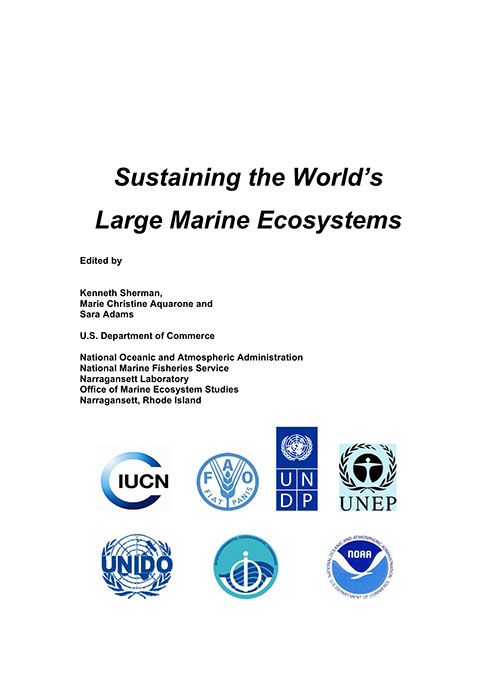