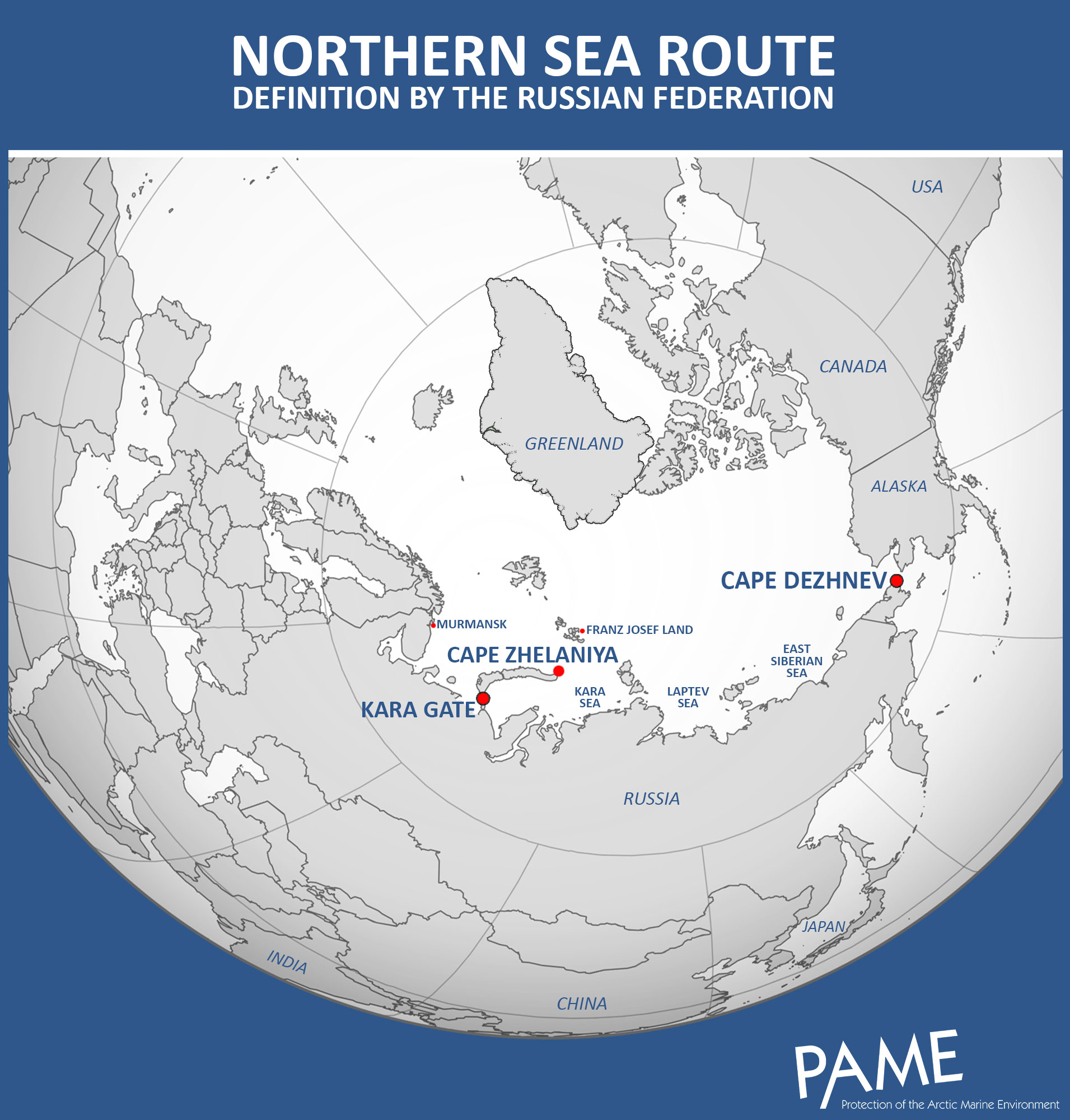 The Northern Sea Route (NSR) is a common name for several navigational routes in the Russian Federation exclusive economic zone (EEZ) – see map to the right (click the map for a bigger version). The area is vast and navigation via the route is carried out in compliance with Russian legislation.

The NSR Administration defines shipping within the areas between the Cape Dezhnev and the Kara Gate and Cape Zhelaniya (or the strait between the Cape and Franz Josef Land) as the Northern Sea Route. The shipping distance between Cape Zhelaniya and Cape Dezhnev is approximately 4000km (2380 nm) when navigating through the Kara Sea, the Laptev Sea and the East Siberian Sea.

Example of navigation: If a ship is navigating through the NSR from Murmansk to China, it can either go through the Kara Gate, closer to the Russian shore, or through the strait between Cape Zhelaniya and Franz Josef Land. It will navigate through the Kara Sea and to the Laptev Sea, either north of the cluster of Islands or through the strait at the shore. When navigating to the East Siberian Sea it can either go north of the island cluster or near the shore before approaching Cape Dezhnev. Navigation depends on conditions of ice and many other factors. Strict regulation applies for navigation through the Northern Sea Route. 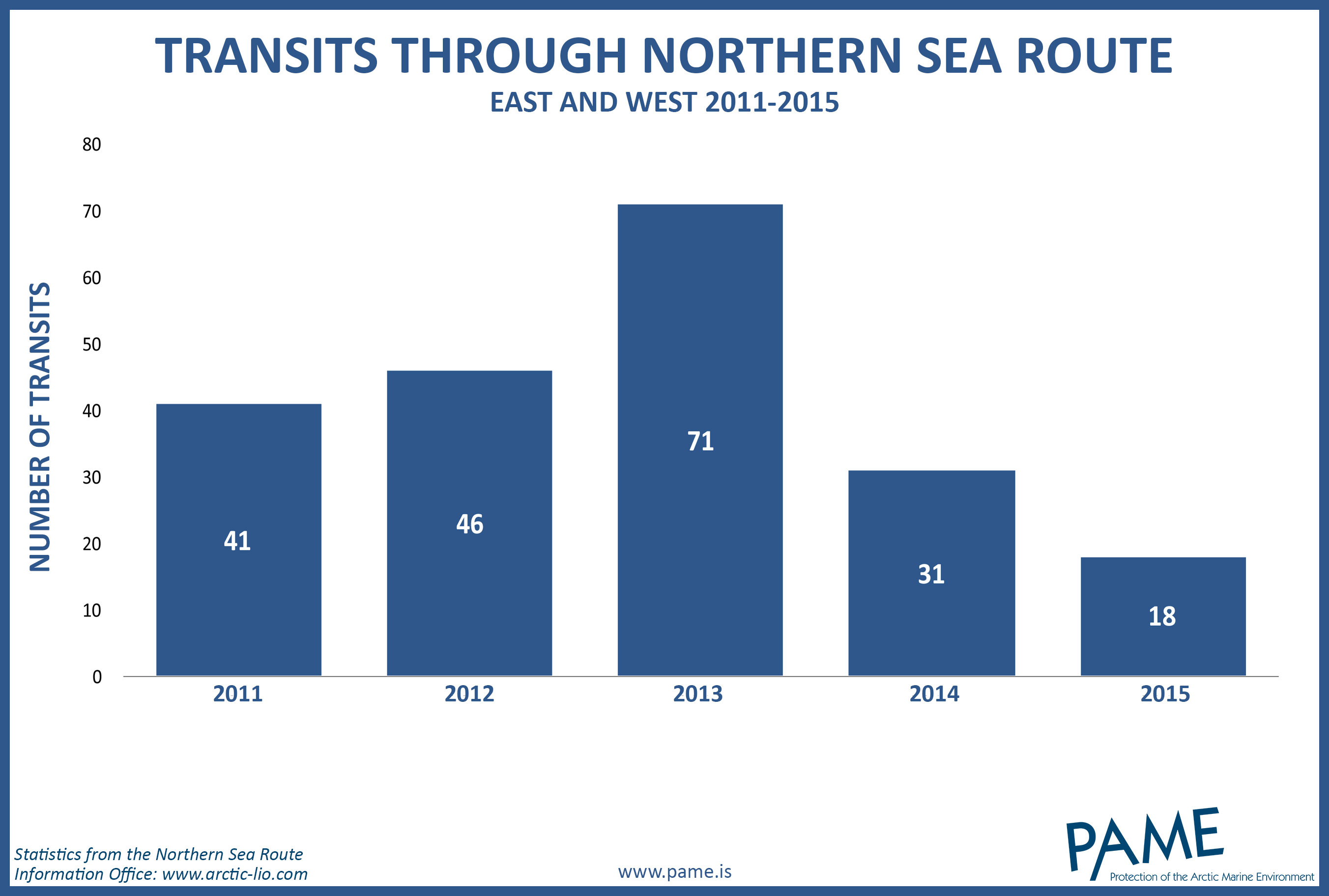 There were 207 transits through the NSR in the years 2011-2015. A transit through the NSR can be defined as a vessel navigating between Pacific and Atlantic Ocean, but its route can vary as shown in the map above. The NSR Information Office releases statistics about transits on its website. The graphs and other information, including statistics, provided herewithin are based on this information. 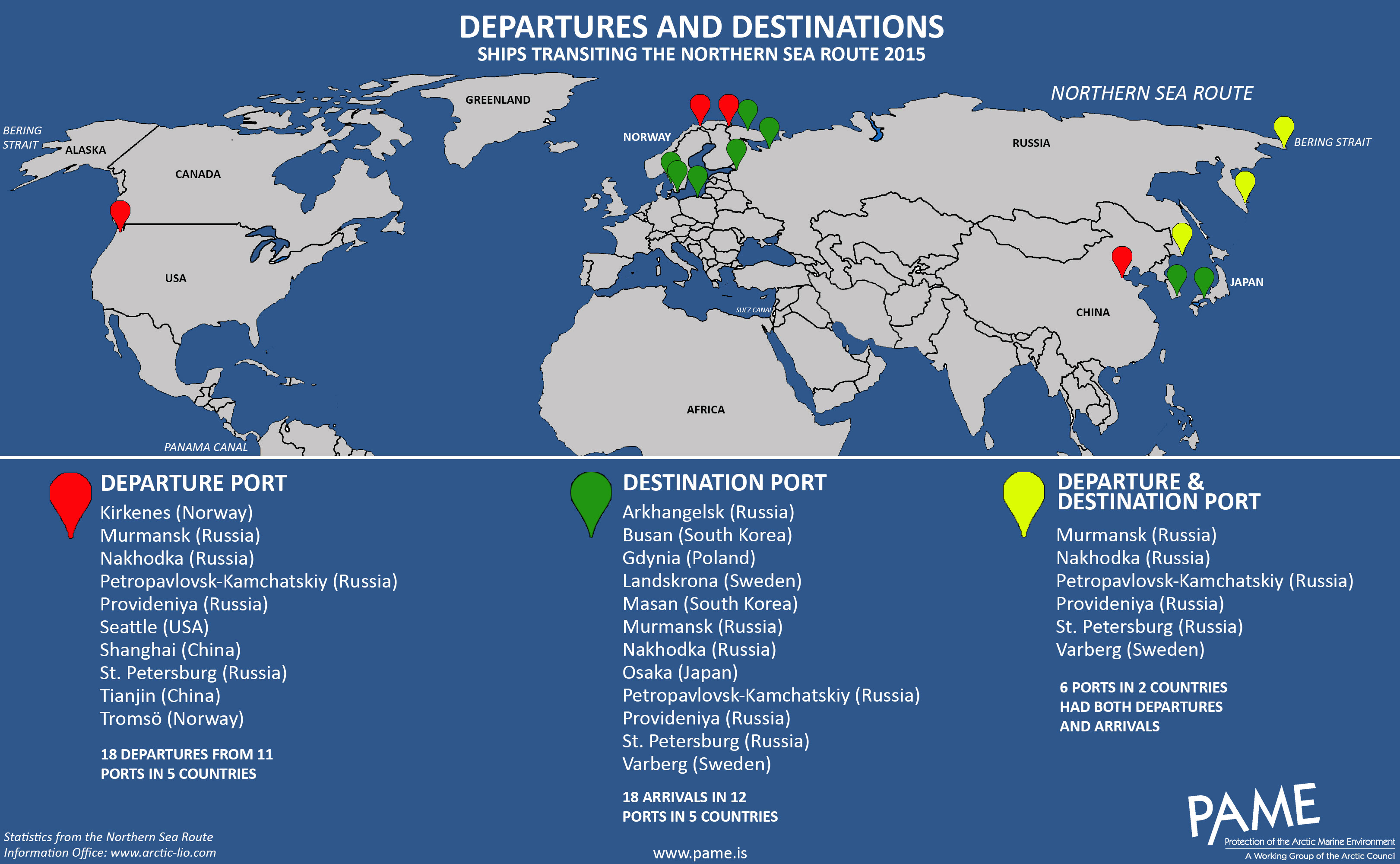 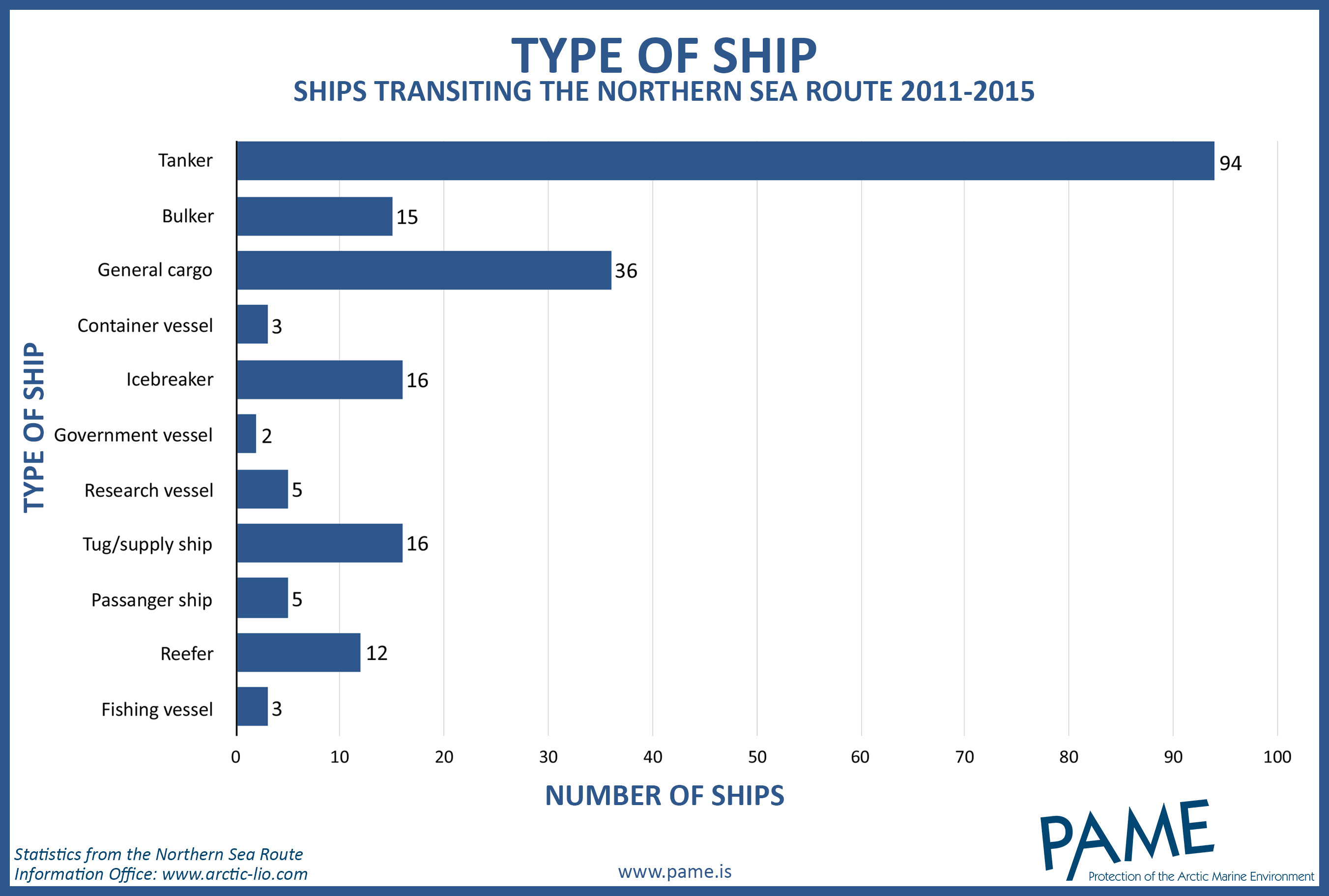 TYPE OF SHIP:
The graph on the rights shows ship types that transited in the five years between 2011 and 2015.

Note: In few instances types of ships have been categorized together, differently from the statistics from the NSR Administration. For example, different types of research vessels were grouped together. Numerous sub-categories of all ships exist but are not considered in the information from the NSR Information Office. The statistics are not consistent between years on names of ship types, for example they both talk about Refrigerator vessels and reefers, but here they are put together. 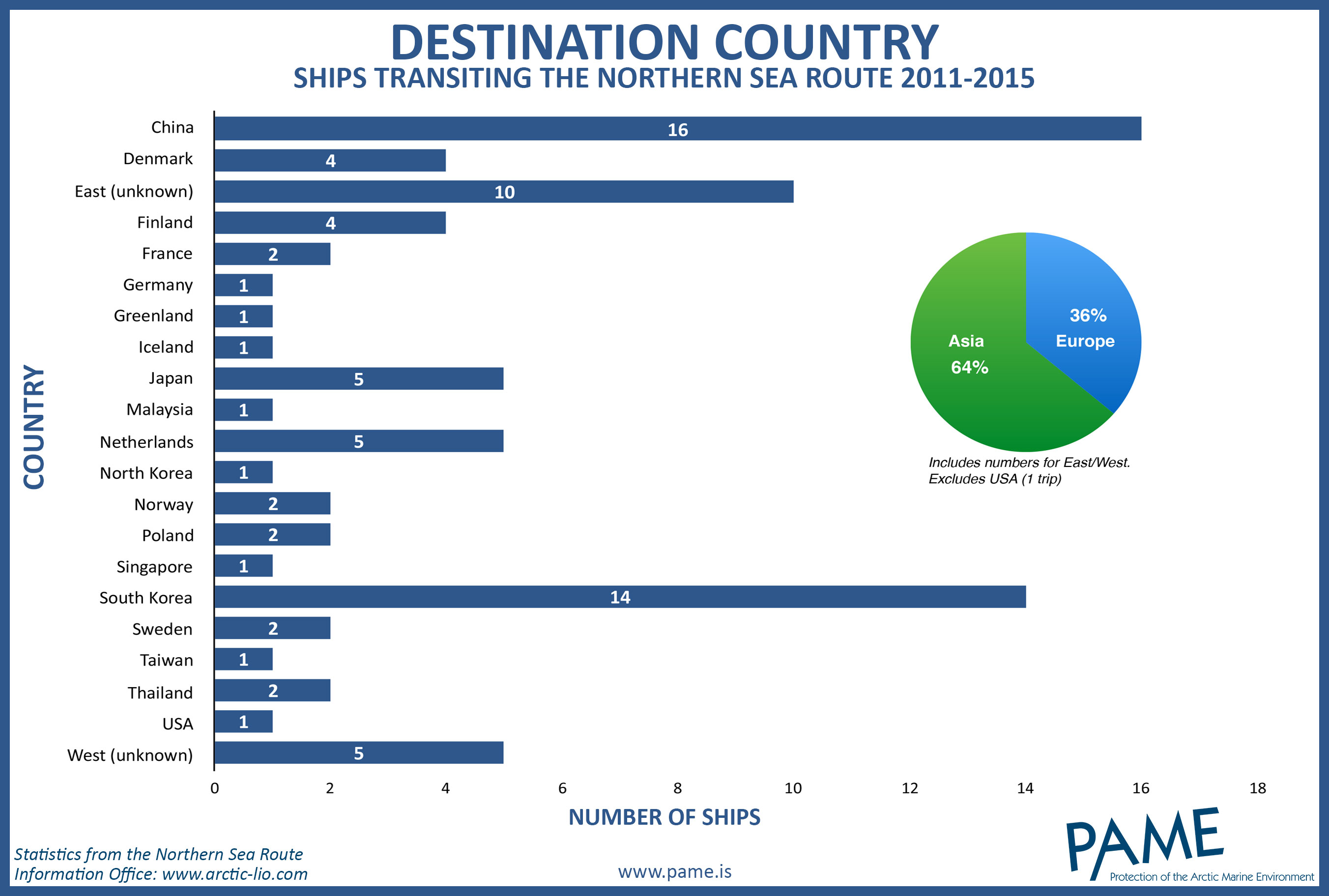 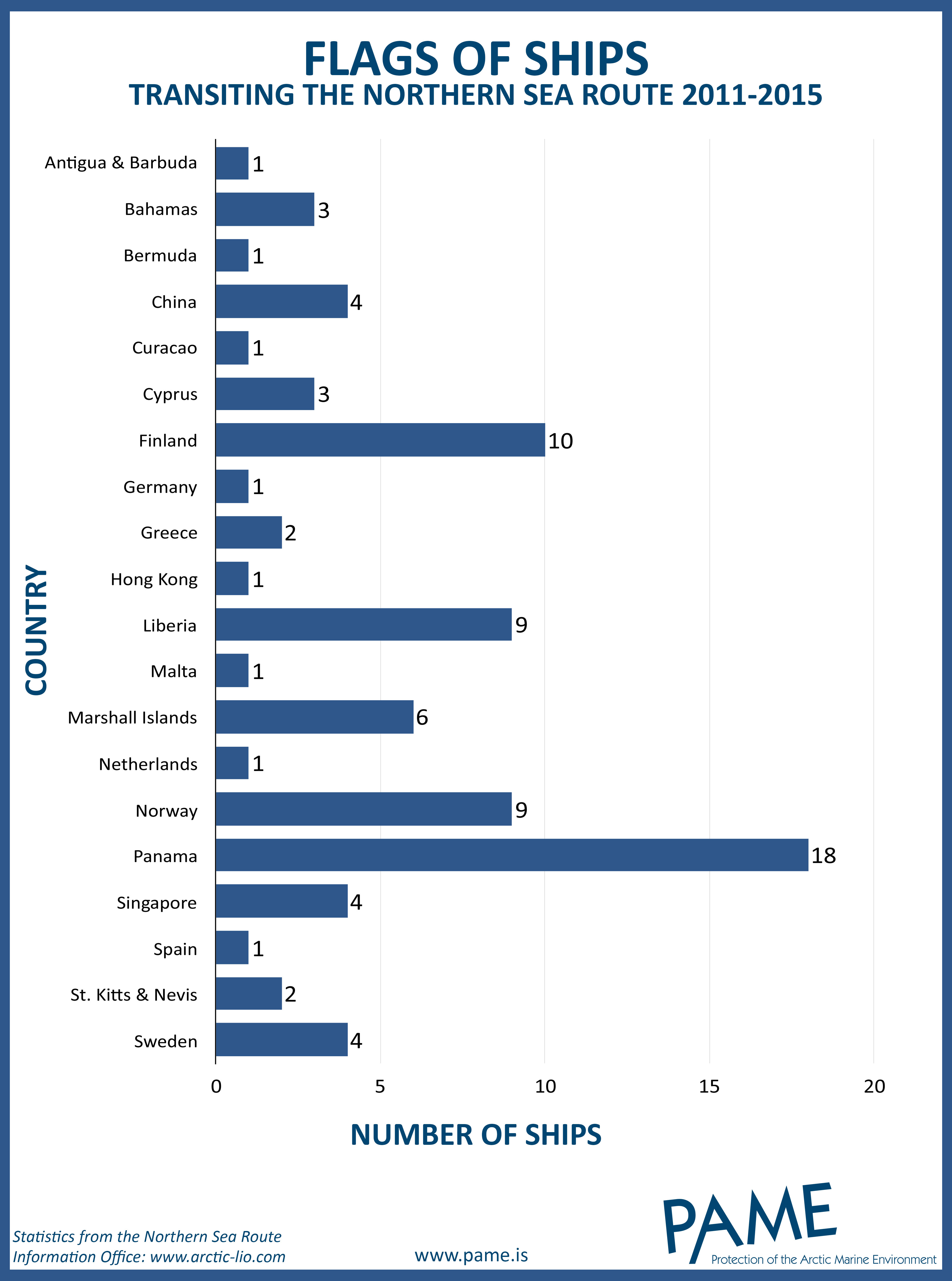 This includes several provisions for navigation, including international conventions such as UNCLOS, SOLAS and MARPOL.

IMO has listed the biggest fleets in the world (by gross tonnage) and as of 31st December 2010 the by far biggest fleet was registered in Panama with over 201 million tons. Liberia was next with 106 million tons and Marshall Islands next with 62 million.

Of the 207 transits, 125 were registered in the Russia Federation and 82 from 20 other countries. 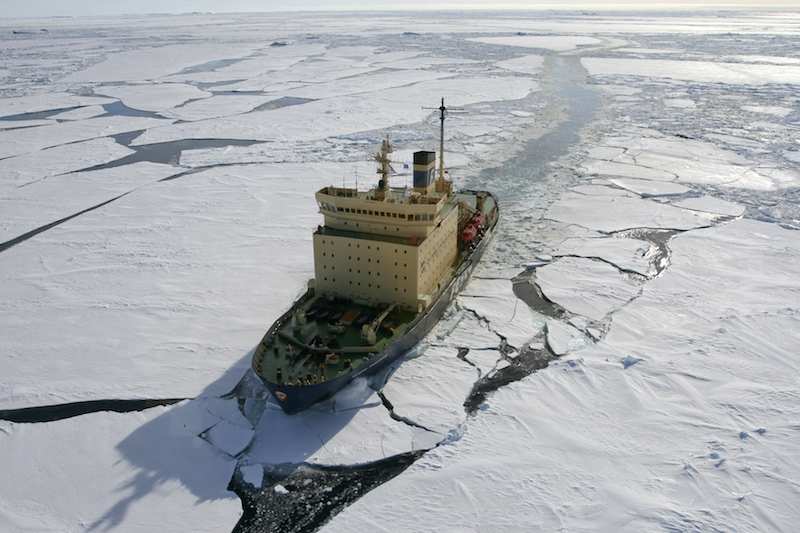 All statistics from the Northern Sea Route Information Office.