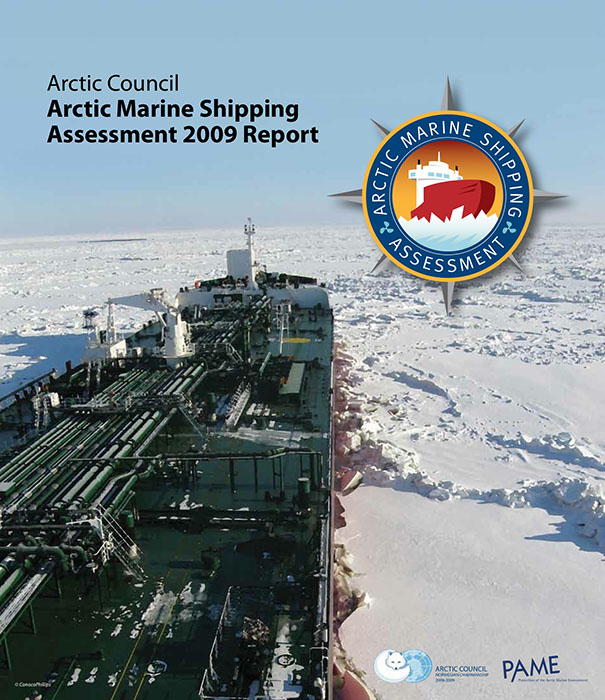 These changes represent both a challenge and an opportunity for governments and local Arctic communities. Of key significance are the effects of expanded marine activities on the cultures and well-being of Arctic populations, especially indigenous residents whose traditional way of life has been partially protected in the past by the very nature of the remote and extreme Arctic environment in which they live.

The Arctic Council, recognizing these critical changes and issues, at the November 2004 Ministerial meeting in Reykjavik, Iceland, called for the Council's Protection of the Arctic Marine Environment (PAME) working group to "conduct a comprehensive Arctic marine shipping assessment as outlined under the Arctic Marine Strategic Plan (AMSP) under the guidance of Canada, Finland and the United States as lead countries and in collaboration with the Emergency Prevention, Preparedness and Response (EPPR) working group and the Permanent Participants as relevant." The Arctic Marine Shipping Assessment, or The AMSA 2009 Report, was approved at the 2009 Ministerial meeting in Tromsø.

The AMSA Recommendations
The focus of the AMSA is marine safety and marine environmental protection, which is consistent with the Arctic Council’s mandates of environmental protection and sustainable development. Based on the findings of the AMSA, recommendations were developed to provide a guide for future action by the Arctic Council, Arctic states and many others.

The AMSA recommendations are presented under three broad, inter-related themes that are fundamental to understanding the AMSA:

It is recognized that implementation of these recommendations could come from the Arctic states, industry and/or public-private partnerships.

B. IMO Measures for Arctic Shipping: That the Arctic states, in recognition of the unique environmental and navigational conditions in the Arctic, decide to cooperatively support efforts at the International Maritime Organization to strengthen, harmonize and regularly update international standards for vessels operating in the Arctic. These efforts include: ---Support the updating and the mandatory application of relevant parts of the Guidelines for Ships Operating in Arctic Ice-covered Waters (Arctic Guidelines); and, ---Drawing from IMO instruments, in particular the Arctic Guidelines, augment global IMO ship safety and pollution prevention conventions with specific mandatory requirements or other provisions for ship construction, design, equipment, crewing, training and operations, aimed at safety and protection of the Arctic environment. The Arctic Marine Shipping Assessment Recommendations

C. Uniformity of Arctic Shipping Governance: That the Arctic states should explore the possible harmonization of Arctic marine shipping regulatory regimes within their own jurisdiction and uniform Arctic safety and environmental protection regulatory regimes, consistent with UNCLOS, that could provide a basis for protection measures in regions of the central Arctic Ocean beyond coastal state jurisdiction for consideration by the IMO.

D. Strengthening Passenger Ship Safety in Arctic Waters: That the Arctic states should support the application of the IMO’s Enhanced Contingency Planning Guidance for Passenger Ships Operating in Areas Remote from SAR Facilities, given the extreme challenges associated with rescue operations in the remote and cold Arctic region; and strongly encourage cruise ship operators to develop, implement and share their own best practices for operating in such conditions, including consideration of measures such as timing voyages so that other ships are within rescue distance in case of emergency.

E. Arctic Search and Rescue (SAR) Instrument: That the Arctic states decide to support developing and implementing a comprehensive, multi-national Arctic Search and Rescue (SAR) instrument, including aeronautical and maritime SAR, among the eight Arctic nations and, if appropriate, with other interested parties in recognition of the remoteness and limited resources in the region.

A. Survey of Arctic Indigenous Marine Use: That the Arctic states should consider conducting surveys on Arctic marine use by indigenous communities where gaps are identified to collect information for establishing up-to-date baseline data to assess the impacts from Arctic shipping activities.

B. Engagement with Arctic Communities: That the Arctic states decide to determine if effective communication mechanisms exist to ensure engagement of their Arctic coastal communities and, where there are none, to develop their own mechanisms to engage and coordinate with the shipping industry, relevant economic activities and Arctic communities (in particular during the planning phase of a new marine activity) to increase benefits and help reduce the impacts from shipping.

D. Specially Designated Arctic Marine Areas: That the Arctic states should, taking into account the special characteristics of the Arctic marine environment, explore the need for internationally designated areas for the purpose of environmental protection in regions of the Arctic Ocean. This could be done through the use of appropriate tools, such as “Special Areas” or Particularly Sensitive Sea Areas (PSSA) designation through the IMO and consistent with the existing international legal framework in the Arctic.

E. Protection from Invasive Species: That the Arctic states should consider ratification of the IMO International Convention for the Control and Management of Ships Ballast Water and Sediments, as soon as practical. Arctic states should also assess the risk of introducing invasive species through ballast water and other means so that adequate prevention measures can be implemented in waters under their jurisdiction.

F. Oil Spill Prevention: That the Arctic states decide to enhance the mutual cooperation in the field of oil spill prevention and, in collaboration with industry, support research and technology transfer to prevent release of oil into Arctic waters, since prevention of oil spills is the highest priority in the Arctic for environmental protection.

G. Addressing Impacts on Marine Mammals: That the Arctic states decide to engage with relevant international organizations to further assess the effects on marine mammals due to ship noise, disturbance and strikes in Arctic waters; and consider, where needed, to work with the IMO in developing and implementing mitigation strategies.

A. Addressing the Infrastructure Deficit: That the Arctic states should recognize that improvements in Arctic marine infrastructure are needed to enhance safety and environmental protection in support of sustainable development. Examples of infrastructure where critical improvements are needed include: ice navigation training; navigational charts; communications systems; port services, including reception facilities for ship-generated waste; accurate and timely ice information (ice centers); places of refuge; and icebreakers to assist in response.

B. Arctic Marine Traffic System: That the Arctic states should support continued development of a comprehensive Arctic marine traffic awareness system to improve monitoring and tracking of marine activity, to enhance data sharing in near real-time, and to augment vessel management service in order to reduce the risk of incidents, facilitate response and provide awareness of potential user conflict. The Arctic states should encourage shipping companies to cooperate in the improvement and development of national monitoring systems.

C. Circumpolar Environmental Response Capacity: That the Arctic states decide to continue to develop circumpolar environmental pollution response capabilities that are critical to protecting the unique Arctic ecosystem. This can be accomplished, for example, through circumpolar cooperation and agreement(s), as well as regional bilateral capacity agreements.

D. Investing in Hydrographic, Meteorological and Oceanographic Data: That the Arctic states should significantly improve, where appropriate, the level of and access to data and information in support of safe navigation and voyage planning in Arctic waters. This would entail increased efforts for: hydrographic surveys to bring Arctic navigation charts up to a level acceptable to support current and future safe navigation; and systems to support realtime acquisition, analysis and transfer of meteorological, oceanographic, sea ice and iceberg information.

AMSA has shaped much of PAME's shipping-related work since it's release.

Click here to see documents derived and related to the AMSA report.

(A) What is this study about?

(B) What does AMSA mean by 'shipping'?

(C) What are the major drivers of current & future Arctic marine activity?

(D) What was the AMSA database important to the study and why was it designed for 2004?

(E) How many ships operated in the Arctic Ocean during 2004?

(F) What is the legal framework or agreement that influences governance of the Arctic Ocean?

(G) What is the main impact of the retreat of Arctic sea ice?

(H) What are the main concerns outlined in AMSA for the future of Arctic marine operations?

(I) What will be the future of trans-Arctic navigation, or voyages from Pacific to Atlantic and vice versa?

(J) What regions of the Arctic are experiencing high concentrations of ship traffic?

(K) What is the most significant environmental concern identified by AMSA?

Ships that have reached the North Pole

At least 133 ships have reached the North Pole in the years between 1977-2017. The Scott Polar Research Institute has assembled a list of the ships, their name, its Captain, the date of arrival, its flag and fuel type.